In an unassuming building on Wheatsworth Road, just outside of Hamburg, is Web-Cote Industries, a hot melt coating company that may melt your heart.

When Web-Cote president Jim Cowen heard about the extensive flooding in Iowa, and that the flooding had reached Hamburg, Iowa, he sent the town almost 2,600 poison-less rodent control glue boards, with a combined worth of approximately $2,000. The company, which manufactures pest control products and other items that utilize hot melt adhesive, provided Hamburg, Iowa, with enough glue boards to capture more than 88,000 creatures.

It may seem like a unique, even bizarre, donation, but Cowen explained that rodent control is needed post-flooding. As Cowen said, you really don’t know what’s in the muck. Rodents dis placed by water damage will seek out dry ground and food, leading them to areas not usually infested. The creatures can be troublesome for many rea-
sons, not least of which is health-related.

The only epidemic-prone infection that can be transferred directly from contaminated water is leptospirosis, the World Health Organization website states. According to the website, “Transmission occurs through contact of the skin and mucous membranes with water, damp soil or vegetation (such as sugarcane) or mud contaminated with rodent urine. The occurrence of flooding after heavy rainfall facilitates the spread of the organism due to the proliferation of rodents which shed large amounts of leptospires in their urine,” states the website. Without treatment, leptospirosis can lead to kidney damage, meningitis and liver failure, among other ailments.

More than 300 people were evacuated from Hamburg, Iowa, since the flooding began. President Obama authorized a Presidential Major Disaster Declaration for six counties, including Hamburg’s home county of Fremont, that have been affected by the flooding along the Missouri River since May 25.

The serious flooding may not immediately result in an infestation.

“They may not have a serious [rodent] problem until the fall,” Cowen said. The glue boards

do not have a shelf- life, so Hamburg can use them whenever needed.

Cowen is interested in potentially continuing this new relationship with the Iowa town.

In the future, he may ask Hamburg to test out new products, expanding Web-Cote’s already

large reach. Web-Cote’s products can be found around the world, though the company

operates entirely out of the site near Hamburg on Wheatsworth Road and a 10,000-square-foot

warehouse down the road.

A Hamburg more than a thousand miles away, with no connection to New Jersey’s own, may be

suffering damages now but one day, it may be Hamburg, N.J., that is in need.

“You never know from one year to the next how favor can be turned,” he said.

The Advertiser-News Wednesday, June 29, 2011
A tale of two Hamburgs

Hamburg, Iowa, is flooding and its “sister city” Hamburg, N.J., has come to its aid.

Web-Cote Industries in Hamburg, N.J., has reached out to its Midwestern sister with an unusual donation.

After seeing news that the Iowa town was bracing for floodwaters from the Missouri River, the employees of Web-Cote knew they had a product that could help them out.

“These rising waters may force mice and rats from the river banks into the town,” commented Jim Cowen, president at Web-Cote Industries in Hamburg, N.J.

Web-Cote produces many glue products for the pest control industry, so it made sense to Cowan for his company to offer a donation of rodent control glueboards to the people of Hamburg, Iowa.

Alan Dowel, who heads the Hamburg, Iowa, Public Works Department, told Cowan he appreciated the call. “We can take anything you can offer,” he said.

We were happy to be able to offer some assistance to a 'sister city’ in need.” Jim Cowan, president Web-Cote Industries, Hamburg, N.J..

Jim Cowen, owner of Web-Cote Industries, demonstrates the rodent control glue boards
manufactured in his plant, located just outside Hamburg. Cowen arranged for his company  to donate 36 cases of the boards to flood-ravaged Hamburg, Iowa, to help address the rodent problem inherent after flood waters recede. 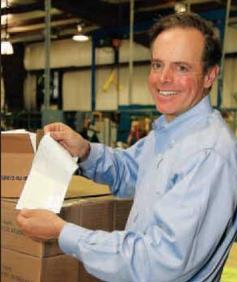